Memory loss was reversed in mice by injecting them with brain fluid from younger rodents, increasing hope for the future. dementia treatments.

The researchers took cerebrospinal fluid (CSF) – a fluid that bathes the brain tissue and spinal cord of all vertebrates – from young adult (10-week-old) mice.

The treatment improved the old mice’s memory recall in a fear conditioning task, in which they learned to associate a small electric shock with a blinking tone and light. 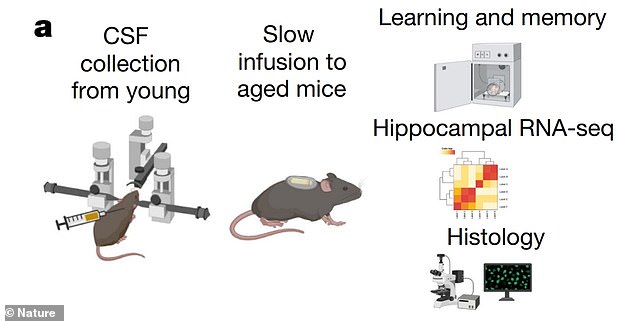 Cerebrospinal fluid from juvenile mice improves memory in older mice, the researchers report. This illustration shows an overview of their laboratory experiments 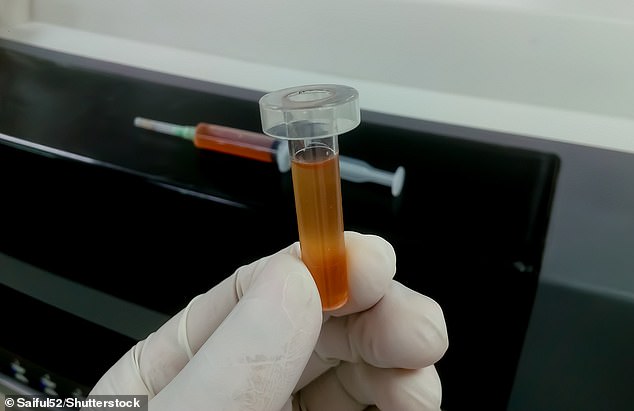 Cerebrospinal fluid (CSF, pictured here in a photo file) is a fluid that bathes the brain tissue and spinal cord of all vertebrates

Dementia is an umbrella term used to describe a category of symptoms characterized by behavioral changes and gradually declining cognitive and social skills.

Alzheimer’s is the most common cause of dementia, but other dementia conditions include vascular dementia, Lewy body dementia, and frontotemporal dementia.

Alzheimer’s disease is thought to be caused by the abnormal buildup of proteins in and around brain cells.

According to Alzheimer’s Research UK forecasts, one million people in the country will have dementia by 2025, doubling to two million by 2050.

The results, published in a new study in Naturedemonstrate the potential rejuvenating properties of young CSF for the aging human brain, not just the brains of mice.

Previous studies have shown that CSF production decreases significantly with advancing age, so fluid infusions for the elderly could potentially lead to improved memory capacity in older humans as well.

“The memory improvements seen in older mice receiving CSF from younger animals can be attributed to growth factors that have been shown to restore neural cell function.

“The results demonstrate the potential rejuvenating properties of young cerebrospinal fluid for the aging brain.”

Infusion of CFS from young mice into old mice restored memory recall in older animals by triggering the production of myelin, a fatty sheath that insulates neurons in the brain.

Neurons, also known as nerve cells, are highly excitable cells that transmit information to parts of the body via electrical signals and improve our learning and memory skills.

The team then used RNA sequencing to determine how CSF processing altered gene expression in the hippocampus, the brain’s memory center.

The hippocampus is one of the few regions of the brain where new neurons are generated. 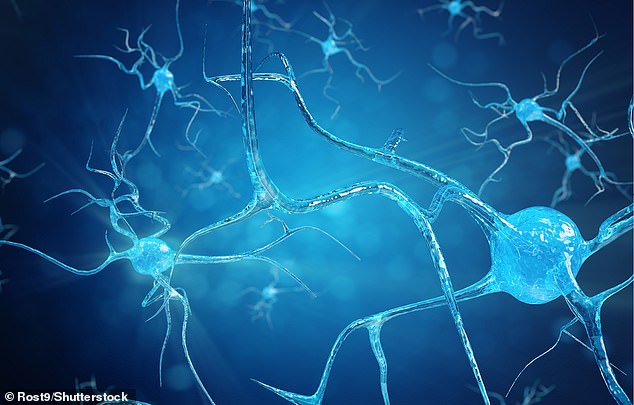 Neurons, also known as nerve cells, are highly excitable cells that transmit information to parts of the body via electrical signals (artist’s impression)

Infusion of young CSF in older mice has been shown to increase the stimulation of cells called oligodendrocyte precursor cells, which give rise to oligodendrocytes.

Oligodendrocytes produce the insulating layer of myelin, which also isolates portions of neurons called axons that carry nerve impulses away from the cell body.

This “myelination” of axonal projections throughout the brain ensures that strong signal connections between neurons are maintained.

To determine the mechanisms underlying these effects, the authors examined the signaling pathways activated by young CSF.

They identified a particular “transcription factor,” a protein that helps turn specific genes on or off by binding to nearby DNA.

This particular transcription factor, known as SRF, it mediated the effects of young CSF on precursor cells of oligodendrocytes.

SRF expression has been shown to decrease in the hippocampus of older mice.

The authors also identified a growth factor known as FGF17 as a candidate for inducing SRF signaling. FGF17 could have potential as a therapeutic target for human treatments.

Dr Miriam Zawadzki and Professor Maria Lehtinen, of Boston Children’s Hospital in Massachusetts, who were not involved in the study, say the researchers have “broken ground in the field of brain health and aging.”

“Therapies to directly access cerebrospinal fluid could be useful in treating dementia,” they write in an accompanying article in News & Views in Nature.

“Any such treatment will be extremely helpful in supporting our aging population.”

Worldwide, approximately 55 million people have dementia conditions, including but not limited to Alzheimer’s disease.

WHAT IS A NEURON AND HOW DOES IT WORK?

A neuron, also known as a nerve cell, is an electrically excitable cell that takes on processes and transmits information through electrical and chemical signals. It is one of the basic building blocks of the nervous system.

In order for a human being to react to his environment, neurons carry stimuli.

A typical neuron is divided into three parts: the cell body, the dendrites and the axon. The cell body, the center of the neuron, extends its processes called axons and dendrites to other cells. Dendrites typically branch out profusely, becoming thinner at each branch. The axon is thin but can reach enormous distances.

All neurons are electrically excitable. The electrical impulse arrives mainly on the dendrites, is processed in the cell body and then moves along the axon.

Over its entire length, an axon functions simply like an electrical cable, simply transmitting the signal.

Once the electricity reaches the end of the axon, at the synapses, things get a little more complex.

The key to neural function is the synaptic signaling process, which is partly electrical and partly chemical.

Once the electrical signal reaches the synapse, a special molecule called a neurotransmitter is released from the neuron.

This neurotransmitter will then stimulate the second neuron, triggering a new wave of electrical impulse, repeating the mechanism described above.