Laos is struggling with acute fuel shortages, rising food prices and growing debt, making it the latest Asian country after Sri Lanka to come under serious financial strain after a surge in global energy and commodity prices.

“In the face of narrowing financing options, even to meet limited financing needs, Laos’s reliance on external and domestic commercial financing will increase, resulting in higher exposure to market sentiment,” Moody’s said.

Laos was already having trouble paying its bills before the recent surge in global food and energy prices precipitated by Russia’s invasion of Ukraine and western countries imposing sanctions on Moscow in response.

“There is pretty significant foreign exchange liquidity pressure at this point, which seems most recently to be the result of rising oil prices and what that means for the import bill,” said Jeremy Zook, lead sovereign analyst for Laos with Fitch Ratings. “Foreign exchange has become quite limited.”

Fitch has rated the country triple C, meaning debt default was a possibility.

The kip, Laos’s currency, has sunk 23.5 per cent against the US dollar this year. As of December, the country’s gross reserves were worth about $1.3bn, enough to cover about 2.2 months of imports, according to the World Bank.

In recent weeks, social media users have published images of long queues at petrol stations and some Laotians have been crossing the border into Thailand to fuel their cars.

Media in the one-party state, which operate under government censorship, have reported openly on the crisis.

The Laotian Times this week reported that the country’s central bank was considering banning people from holding foreign currencies in an effort to address the liquidity crunch, and that the government was set to issue high-interest bonds to reduce the volume of cash in circulation. 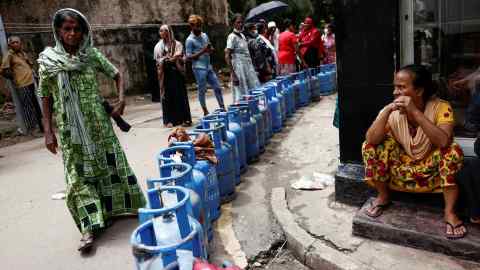 Laos has borrowed heavily in recent years to fund hydropower projects and a Chinese-built railway bisecting the country that opened in December.

According to the World Bank, the south-east Asian country’s public and publicly guaranteed debt rose to $14.5bn, or 88 per cent of gross domestic product in 2021, up from $12.5bn, or 68 per cent of GDP in 2019. Electricité du Laos, the power utility, accounted for more than 30 per cent of its government debt, according to the multilateral lender.

Unlike Sri Lanka, which has a wide range of creditors, Laos owes about half of its debt to China, with which it shares a border, giving its financial crisis sharp geopolitical implications.

Beijing has given Vientiane some debt relief in recent years, analysts said, and would probably play a leading role in any future measures. “The big unknown is what happens with China,” Zook said.