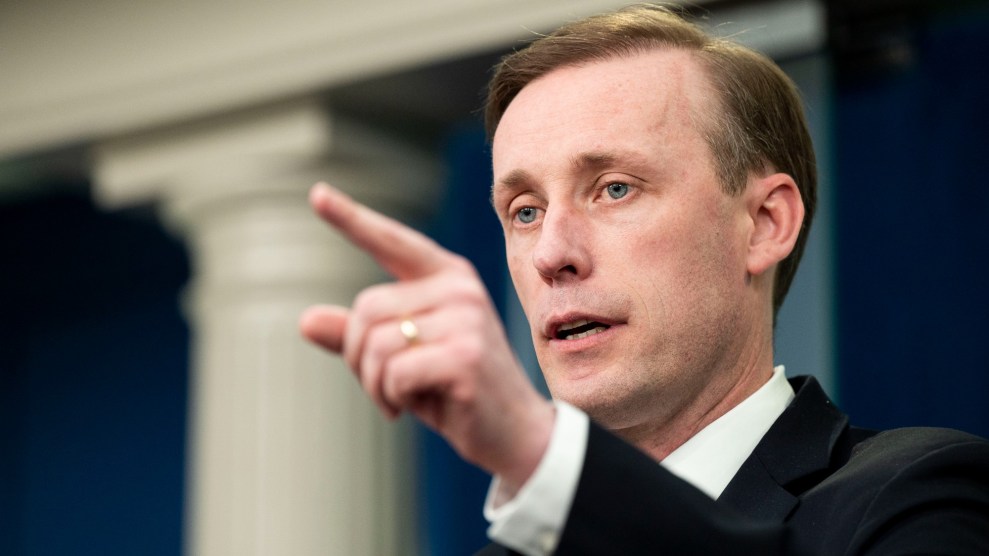 Facts matter: Sign up for the free Mother Jones Daily newsletter. Support our nonprofit reporting. Subscribe to our print magazine.

“We’re going to get Ukraine the weapons it needs to beat back the Russians to stop them from taking more cities and towns where they commit these crimes,” Jake Sullivan said on ABC News’ This Week.

Sullivan made the rounds on morning shows Sunday, emphasizing the administration’s willingness to aggressively support Ukraine. On CBS’ Face the NationSullivan credited US support with helping defeat Russian forces outside Kyiv. “Russia failed,” Sullivan said. “And they failed chiefly because of the bravery and skill of the Ukrainian armed forces. But they also failed because the United States and our partners put in the hands of those armed forces advanced weapons that help beat back the Russians.”

The Russians have retreated after nearly encircling the Ukrainian capital and are redeploying to focus on controlling the Donbas region in eastern Ukraine. Russia has appointed a new commander for its forces in Ukraine, Alexander Dvornikov, who is accused of previously overseeing the indiscriminate bombing of civilians in Syria, according to reports Sunday.

American commentary on the war is often focused on steps the Biden administration has declined to take due to the risk of escalation toward direct conflict with Russia, such as enforcing a no-fly zone. But Sullivan’s tough talk Sunday highlights the extent to the which the US, responding to an effective lobbying campaign by Ukrainian President Volodymyr Zelenskyy and to domestic pressure to do more to oppose Russian aggression, has moved toward full-blown military support for Ukraine and a proxy war with Russia. Recently, the White House has appeared less concerned with provoking Russia, and has shifted from downplayed its assistance to Ukraine toward highlighting the value of US support for Kyiv.

Last month, White House press secretary Jen Psaki emphasized that the US was sending only “defensive weapons systems” to Ukraine. But when asked about the distinction on Sunday, Sullivan seemed to acknowledge that he White House had dropped it. “Given the nature of the battle, how things have shifted and adjusted and what the Russians have done, frankly, killing civilians, atrocities, war crimes, we have gotten to a place in the United States, and across many members of the NATO alliance, where the key question is, what does Ukraine need and how can we provide it to them?” Sullivan said on Meet the Press.

The Pentagon outlined the extent of US support in a fact sheet released Thursday. This is part of a new outpouring of armaments from NATO to help Ukraine prevail in what could be a drawn out contest for control of territory in eastern Ukraine. The United Kingdom said Saturday that it is sending 120 armored vehicles and anti-ship missile systems to Ukraine, in an announcement that followed an in-person visit to Kyiv by Prime Minister Boris Johnson. Biden announced Friday that the United States would place a Patriot missile defense system in Slovakia, in a swap in which the Slovaks supplied Ukraine with a Russian-made S-300 air defense system.

Sullivan noted that he and General Mark Milley, the chairman of the Joint Chiefs of Staff, earlier in the week “spent two hours on the phone with the chief of the Ukrainian Armed Forces and President Zelenskyy’s top aide. And we went through every weapons system that Ukraine is seeking, in priority order. And we have developed plans to deliver those as rapidly as possible.”