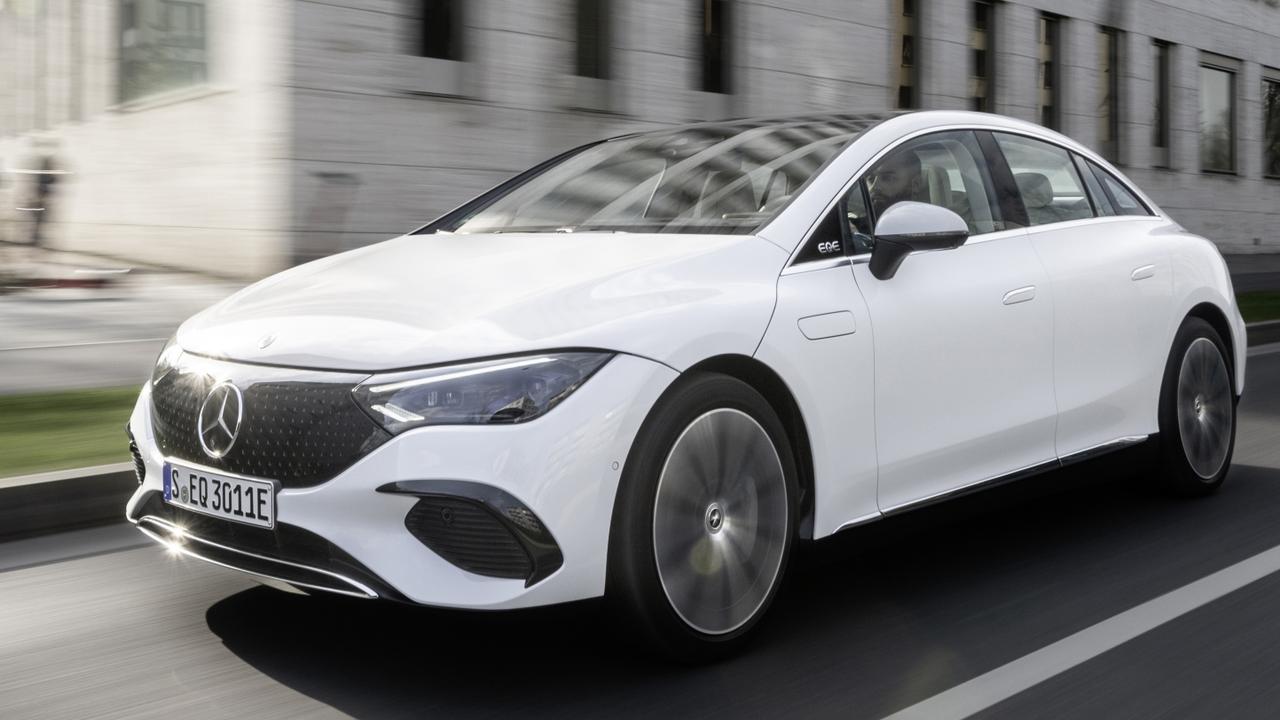 The world’s oldest carmaker was caught flat-footed by the brash American upstart but now it’s fighting back with some impressive new models.

Here’s a second serving of EV excellence from the world’s oldest car maker. The EQE sedan from Mercedes-Benz’s all-electric EQ sub-brand is more compact and less costly than the EQS liftback limo, but includes all the innovative tech that makes the bigger car a star.

The EQE won’t arrive in Australia until late this year at the earliest. But with European deliveries of the new EV only weeks away, Mercedes gave media from around the world a chance to drive it for the first time in and around Germany’s financial capital, Frankfurt.

There’s a strong family resemblance to the ultra-aerodynamic EQS. Though the EQE’s shape isn’t quite as slippery, it has the same curving roofline and grille-less nose with over-sized three-pointed star badge. The obvious point of difference is the EQE’s bobtail rear.

Not only is it shorter overall than the EQS, there’s less distance between its front and rear axles. Even so, Mercedes says the interior of the new EQE is longer and wider than in its petrol-powered equivalent, the E-Class.

The EQE’s wheelbase reduction means there’s only room for 10 battery pack modules, compared to 12 in the EQS, and this cuts the usable amount of electricity it can store to 90kWh. This isn’t a problem.

In Europe, Mercedes is launching the EQE in 350+ form. It has a driving range of up to 654km, measured according to the WLTP test standard. While this is about 125km less than the EQS 450+, it’s still an impressive figure compared to other EVs.

The EQE 350+ is powered by a single 215kW electric motor in its rear axle. As in the

The EQE line-up will grow rapidly. Next on sale in Europe will be the dual-motor AMG 43 4Matic. Other dual-motor AWD models, the 500 and AMG 53, will follow.

The range is also likely to expand downwards in power and price from the 350+ with another single-motor variant.

So far the AMG 53 4Matic+ is the only EQE model definitely confirmed for launch in Australia. At least two other variants are likely to join it, we’re told.

After the EQS, the EQE is only the second car to be built on Mercedes-Benz’s first

purpose-designed pure-electric platform. This makes them different from the two other EVs the company has on sale right now. The EQA and EQC are heavily modified versions of the petrol-powered GLA and GLC. They work okay, but their engineering design isn’t optimised for electric power.

Driving the EQE proves the superiority of its electric-only engineering. The most striking thing is the quietness and smoothness. It’s the equal of the more expensive EQS, possibly the most refined EV in the world right now.

All of the EQE’s Mercedes brought to Frankfurt were fitted with air suspension, and they provided a lushly comfortable ride over the city’s tram tracks and potholes. This system will be standard in the AMG 53 for Australia, but may be optional in less costly variants.

Though the EQE 350+ is heavy, weighing a little more than 2300kg, performance is plenty

peppy and the handling is deeply capable.

The interior design is outstanding. Top EQE models, including the AMG 53, have the same Hyperscreen as the EQS. This all-glass, full-width instrument panel is stunning and brilliantly user friendly. The alternative, with separate instrument and portrait-oriented centre screens, is also lovely to look at.

Though the interior is beautifully designed and made, the EQE’s shape means the view through the rear window is slitty and the diving roofline makes ducking your head to get into the roomy rear seat a good idea. The cargo compartment is a handily large 430 litres, though the boot opening isn’t huge. Charging options are quicker than for the average EV. While an 11kW AC charger is standard the EQE has the option of a 22kW unit. And it can handle up to 170kW from a DC fast charger, a rate Mercedes claims will add 250km of driving range in

Comfortable, quick, almost silent and a pleasure to drive, with outstanding interior design and a distinctive aero exterior, the EQE is the kind of EV that will make many Mercedes buyers consider converting from pump to plug. Especially if, as expected, the EQE is priced similarly to its E-Class equivalents.