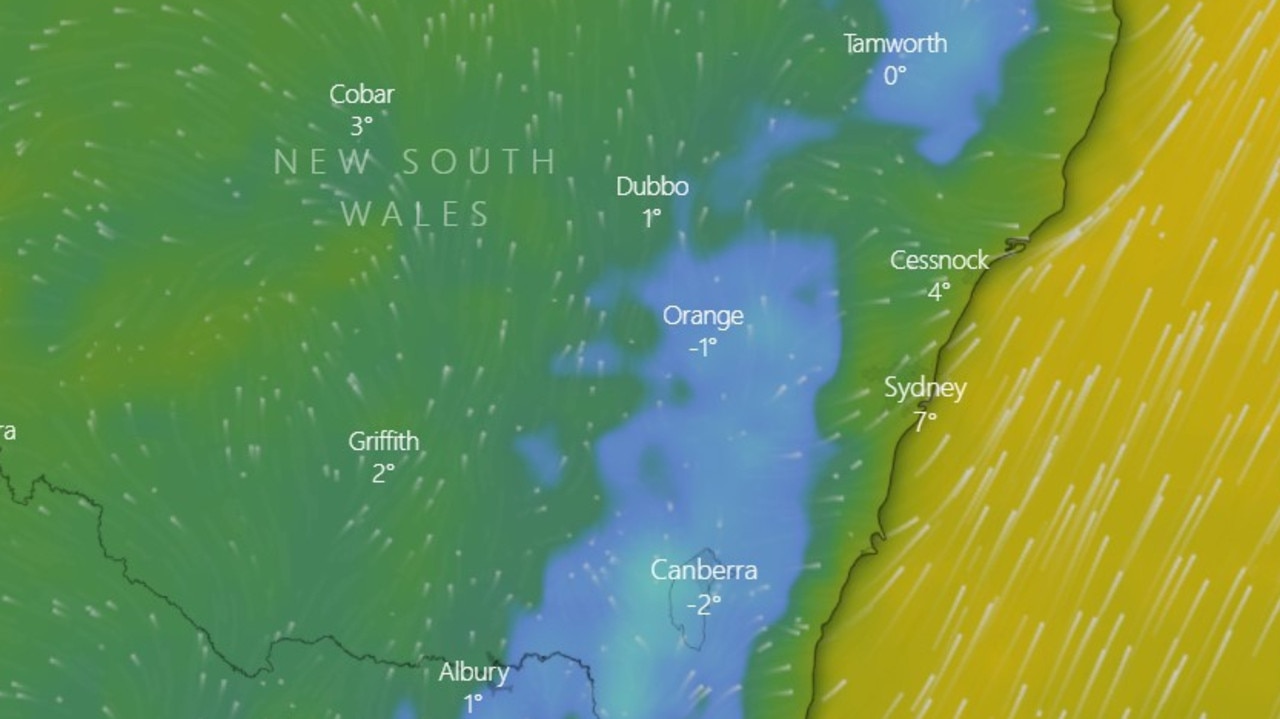 A brutal blast of polar air is set to sweep most of the country, with parts of the country seeing temperatures reaching as low as -3 ° C.

A blast of polar air will hit the south and east of Australia in late autumn bringing freezing temperatures, showers, snow and crisp winds.

The rapid transition to winter weather will happen just in time for June 1, with some communities experiencing the coldest temperatures of the year so far.

The Bureau of Meteorology has warned that the great cold epidemic will break most of the winter records, not to mention the records of the last days of autumn.

Weatherzone meteorologist Joel Pippard said the system will result in a “large area of ​​damaging winds”, which could extend from Perth to Brisbane and Hobart.

The cold blast will be felt for the first time in southern WA on Saturday, with Perth experiencing heavy downpours.

WA’s south coast will suffer from heavy rains, gusts of wind and thunderstorms on Saturday before the rainy weather extends to Eucla district all through Sunday.

BOM predicts heavy rainfall on both northwest WA and the Pilbara coast, with a total expected of up to 60mm.

“Isolated drops of up to 80mm are expected in the Flood Watch area for Saturday,” said BOM.

“On Sunday, further total rainfall of 50-90 mm is possible with total insulated up to 120 mm”.

The cold front will move across South Australia on Sunday morning, where it will remain for most of the day, with heavy showers and gusty thunderstorms hitting the area until Monday.

The BOM warned that a severe weather warning could be issued for harmful wind gusts.

“Temperatures in South Australia will likely be the coldest or nearly coldest day of the year so far for many locations,” the office said.

Adelaide is expected to see temperatures of just 9 ° C in the early hours of Sunday morning.

Victoria will begin experiencing the cold front on Monday and Tuesday with gusty showers, strong winds and possible storms.

Melbourne’s temperature on Monday could drop to 7 ° C, while Bairnsdale in the western part of the state could reach 6 ° C.

On Tuesday snowfalls are certainly expected with possible snowstorms around the Alpine peaks.

For the first parts of the week, the BOM could issue severe thunderstorms and severe weather warnings for damaging winds.

“The snow level is expected to drop to 1200 meters on Monday, and then approach 700 meters on Tuesday,” said BOM.

On Monday and Tuesday, the outbreak of winter weather will break into NSW, starting with freezing winds.

BOM said it could issue a severe weather warning.

“The cold front can bring significant rainfall into the southern hinterland of the state, mainly around the western parts of the central and southern ranges,” BOM said.

Parts of NSW’s east coast are expected to experience strong winds towards the end of Monday and into Tuesday.

Temperatures in Sydney are expected to drop to as low as 7 ° C on Thursday morning, while areas in the western part of the city will see lower temperatures.

Penrith is expected to wake up at 6 ° C, while Camden in the southwest will wake up at 5 ° C.

Parts of the mid-west of the state such as Dubbo, Coolah, and Mudgee wake up at -1C.

Lithgow, Orange, Bathurst and Crookwell will see temperatures of -2 ° C on Thursday morning as the cold spell hits the state.

Armidale in NSW Northern Tablelands is expected to be the coldest part of NSW with morning temperatures reaching just -3 ° C on Thursday.

The cold spell will move north towards Queensland throughout the middle of the week, just in time for winter.

Thursday should be the coldest day of the year so far for the state of the sun.

Southern parts of the state will wake up to morning temperatures as low as 1 ° C, including Stanthorpe and Applethorpe

Meanwhile, Brisbane is expected to hit a low of just 6 ° C on Thursday.

Strong and potentially damaging winds are expected due to the cold front in Tasmania.

The island state will also experience a huge drop in temperatures and snow of up to 700 meters on Tuesday evening and Wednesday morning.