Cons:
– Touch controls aren’t very sensitive, and offer limited customisation
– No wear detection sensors or ANC
– Design is on the bulkier side

JBL the brand needs no introduction. They have a wide variety of audio products in India, including several true wireless (TWS) earphones, to cater to different types of users. The Endurance Race TWS that we have for review today is a sports earphone targeted at people looking for a durable workout companion. The feature list of this product does seem to tick a lot of boxes. Time to take it out of the box and put it through the grind.

JBL Endurance Race TWS: Design and Comfort (7/10)
These JBL buds are quite chunky but feel rugged with all the rubberised protection. These earbuds have an IP67 rating for dust and water resistance, and you can not just wear them during workouts or jogs but also in a shower (avoid wearing them during a shower though). You also get extended silicone loops for a better fit, and they work well as the buds never popped out of my ears even during workouts, and at the same time, I didn’t feel excess pressure on the earlobes.

The silicone eartips enter the ear canals and provide a decent seal. You get two more pairs of tips in the bundle if the preinstalled medium option isn’t the right size for you. The shape of the buds is hard to describe in words; just take a look at some of the images below. The design did remind me of the Soundcore Liberty 2 earbuds that I reviewed a couple of years ago. Though the earphones stick out of the ear a bit, they don’t look awkward. The buds and the case largely have a black matte finish with a hint of gloss, and the combination works well aesthetically without attracting too many smudge marks. The charging case is also on the bulkier side and weighs close to 45 grams. It is not exactly pocketable, unless you don’t mind a noticeable bulge in your pocket. The case doesn’t have any ingress protection, so try not to take it out in the rain. A charge indicator LED is located at the front of the case, while a USB-C charging port is present at the back. 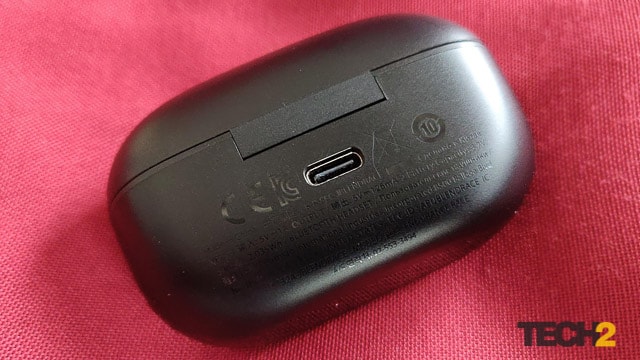 The earbuds have touch enabled zones at the back, and the touch sensitivity isn’t the best I have come across. I would suggest tapping at a more relaxed pace rather than rushing through the taps, else it tends to miss a tap leading to undesired results, especially for the triple tap gesture. More on that in a bit.

JBL Endurance Race TWS: Features and Specifications (7.5/10)
Each earbud is fitted with a 6 mm driver, but don’t be fooled by the size as they can produce some serious bass. There is no active noise cancellation (ANC) here, however you do get two transparency modes that JBL prefers to call Ambient Aware and TalkThru. While the former lets the ambient noise through, the latter focuses on enhancing vocal frequencies, facilitating a quick conversation without removing the buds from the ears.

There are no wear detection sensors on these JBL buds, which I would have liked to see given their price. These earbuds are Bluetooth 5.2 compliant and support SBC and AAC codecs. You get access to various settings of the buds after you install the JBL Headphones app and sync the earphones with it. The app mainly lets you alter the sound profile, configure the controls and update the firmware among other things.

Just like in the case of Sony earphones, you cannot assign an individual function to each gesture. You have to assign one entire set for each earbud. You can choose from Ambient sound control, Playback control, Volume control and Voice assistant control. Most sets assign the functions to single tap and double tap gestures, with Playback controls being the only exception, where triple tap is mapped to previous track function, which is not a very smart thing to do. As I mentioned earlier, these JBL earphones often miss the third tap, and when only two taps register, it jumps to the next track instead of going to the previous one. Jumping two tracks back from there can be an ordeal as you need to time your triple taps to perfection. Might as well use the phone to go back to the previous track. A long press is a better gesture for jumping to the previous track than a triple tap. Something JBL can consider fixing in a future firmware update.

JBL Endurance Race TWS: Performance (7/10)
These buds aren’t the loudest around but are sufficiently loud at close to 70% and 80% volume level, indoors and outdoors respectively. When the company advertises ‘JBL Pure Bass Sound’, you can guess what the default sound signature of the Endurance Race is. Yes, it is bass heavy, but given that one is expected to mainly use these earphones during a workout or a jog, the extra punch is not a bad thing. The extra bass does engulf certain midrange frequencies, but the overall output is quite energetic.

Certain midrange frequencies get masked, but the vocal clarity is pretty decent. The highs are sharp but roll off a bit too soon. Thankfully, the companion app offers you a 10-band equaliser to tweak the sound to your liking. If that’s too much work, you also get five audio presets to play with. Boosting certain midrange and high-end frequencies in the equaliser does bring a better balance to the overall sound without compromising on the bass. Certainly worth trying. The soundstage here is reasonably broad and doesn’t make the output seem crammed in a smaller space. While the company does not specify the latency figures, there was no perceptible lag between the video and audio when streaming videos. The wireless range is pretty standard with the buds retaining a strong connection up to 10 metres with a clear line of sight. The Ambient Aware and TalkThru modes work well when you need to be aware of the surroundings or people around you, and do not impact the sound quality when enabled.

JBL Endurance Race TWS: Call quality (7/10)
The call quality on the JBL Endurance Race is average. Though you are clearly heard by the person on the line, vocals aren’t the sharpest. Several people on call realised I was using some kind of hands-free device for the call. When outdoors, the microphones do pick up some background noise like that of traffic, but they manage to keep it in the background without impacting the conversation much.

JBL Endurance Race TWS: Battery life (8.5/10)
The battery backup of the JBL Endurance Race is quite impressive. The company claims an ambitious 10 hours for the buds and 30 hours overall with the charging case, and they aren’t off the mark either. With the loudness close to 75% during the test process, the earbuds managed to go on for close to 9 hours before one of the earbuds ran out of juice, while the other still had 20% left. That must be one of the longest battery life figures for just the buds. Now you know why they weigh over 12 grams. The charging case managed to charge them fully twice more, taking the overall battery backup of close to 27 hours for the buds and case combined, which is excellent. They do support fast charging but the numbers are modest. A 10 minutes charge gives you close to an hour of playtime, which is handy but not special. The product can be fully charged in less than two hour with a standard USB-C charger.

JBL Endurance Race TWS: Price and verdict
The JBL Endurance Race is priced at Rs 5,999 with a one year warranty, and can often be spotted for 10% lower. For that price, you get a pair of rugged TWS earphones with IP67 ingress protection, a lively sound output that can be tweaked further from the companion app, transparency modes and of course, impressive battery backup. For all that and JBL’s brand value, the price seems reasonable. However, under 5K would have been more apt considering the competition.

Yes, we know these are sports earphones and the focus is mainly on durability, but you do get earphones with comparable sound and with active noise cancellation in this budget or less. A couple of options that come to mind straight away are the OnePlus Buds Z2 and Realme Buds Air 3 for Rs 4,999 and Rs 3,999 respectively. Both also let you assign specific functions to each touch gesture, and their companion apps offer some sound tweaks too. Choose the one that ticks more boxes for you.