Throughout her historic reign, Queen Elizabeth II was an unwavering advocate for the environment, and planted many a commemorative tree.

Her favourite tree was an oak in Helmingham Park, Suffolk, where she would stop every November for a dram of whiskey while out hunting.

However, a new study led by Western Sydney University in Australia, claims that climate change could be threatening the species’ natural climate tolerance.

Healthy trees absorb carbon dioxide and produce oxygen that we breathe, but also provide shade, and cool the atmosphere by releasing water through their leaves.

These vital properties are compromised if air temperatures rise dramatically or rainfall is reduced.

Over a thousand other species were also identified as being at risk, which would additionally reduce the livability of cities.

Lead author Dr Manuel Esperon-Rodriguez said: ‘A surprising finding was that about half of the tree species in each city examined are already experiencing climate changes that put them at risk.

The news comes as a tree-planting initiative to mark the Queen’s Platinum Jubilee has been extended to allow people to plant trees as a memorial to the monarch.

Researchers have flagged over 1,000 urban tree species – including oaks, maples and pines – as being at risk of exceeding their natural climate tolerance (stock image) 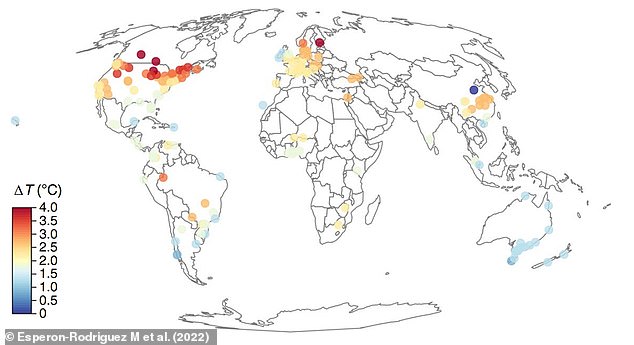 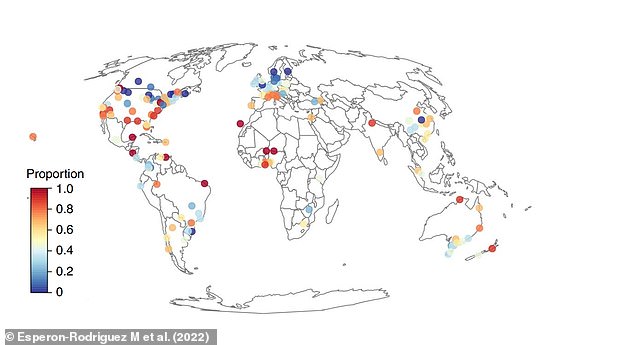 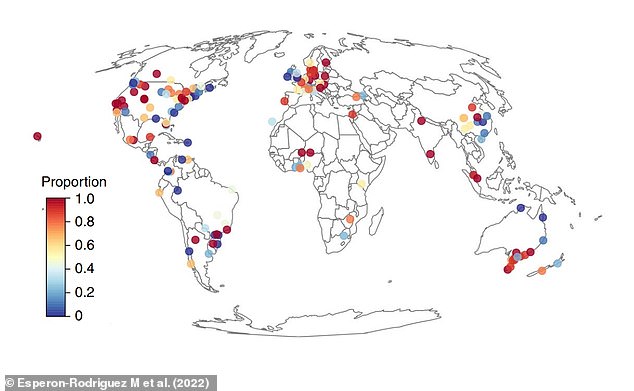 TREE SPECIES AT RISK OF EXCEEDING THEIR CLIMATIC TOLERANCE

Trees and shrubs in our cities provide important benefits to 4.2 billion people – more than half of the global population, the authors claim.

Dr Esperon-Rodriguez added: ‘Trees and shrubs absorb carbon dioxide and also cool their surroundings by providing shade and by pumping water up from their roots and releasing it through their leaves.

‘They also purify air and water, provide habitat for native animals, and improve people’s mental health and wellbeing through connection to nature.

‘With all these benefits, increasing urban forest cover is a key climate action and livability strategy for many governments and communities around the world.’

In the study, published in Nature Climate Change, the team evaluated the climate risk to 3,129 tree and shrub species in 164 cities across 78 countries, that had all been logged in the Global Urban Tree Inventory.

They performed impact analyses using current and projected temperatures and rainfall, to make predictions for the years 2050 and 2070.

They identified a ‘climatic safety margin’ for each species, which establishes its ability to tolerate changes in mean annual temperature (MAT) and annual precipitation (AP) in its city.

Exceeding the margin does not necessarily mean the tree will die, but the climate conditions will affect their health and performance.

It was found that 56 per cent of species are already experiencing climate conditions that exceed their safety margin for MAT, and 65 per cent for AP.

All of the tree species found in Barcelona, Niger and Singapore have already exceeded their climatic safety margins.

The researchers also looked at the impacts under the medium emissions scenarios – where emissions decline after a peak in around 2080, and global temperatures rise by 3°C to 4°C by 2100.

The MAT and AP numbers are thus predicted to increase to 76 per cent and 68 per cent of species respectively.

Climate risk for urban species is likely to be highest for cities in countries at low latitudes and with high climate change vulnerability, like India, Niger, Nigeria and Togo.

Additionally, the plant families with the largest number of species at risk are Myrtaceae, Fabaceae and Rosaceae, with the latter including a number of fruit trees.

One of the trees identified as being at risk of exceeding its climatic tolerance is the oak tree.

This was the favourite of the late Queen Elizabeth II, who would stop at a particular tree in Helmingham Park, Suffolk while out hunting.

Each November, she would take shelter at the hollow oak with a dram of whiskey.

Co-author Dr Jonathan Lenoir from the French National Centre for Scientific Research said tat when climatic conditions exceed the natural tolerance of trees it can not only lead to poor tree health, it can also reduce their cooling effect.

He said: ‘During drought or heat stress, trees can stop transpiring to reduce tissue damage.

‘This means that at a time when we most need their natural air conditioning it could switch off.

‘Selecting species that are resilient to future climate conditions is important to the health and survival of our urban forests, ensuring those trees and shrubs keep functioning to keep us cool.’

The authors state that their predictions are likely conservative, as they do not take into account the potential effects of increasing population, urbanisation and prevalence of diseases and pests.

They hope that the results of the study could help to prioritise efforts to protect urban plants and secure their associated ecosystem services to make cities liveable.

‘This study is globally important because it identifies species at risk and also indicates which species are likely to be climate resilient,’ said Dr Esperon-Rodriguez. 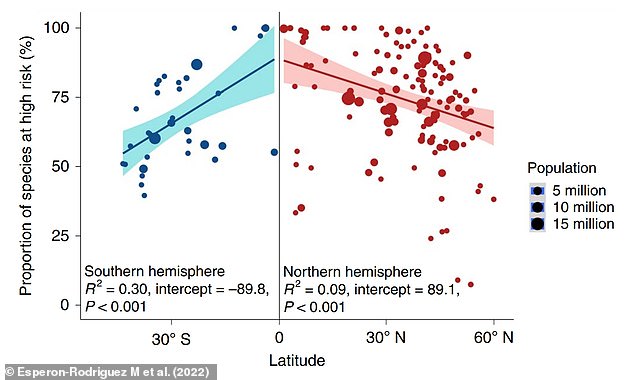 Relationship between the proportion of species at risk by 2050 under medium emissions scenario and cities’ latitude. Point size indicates human population size 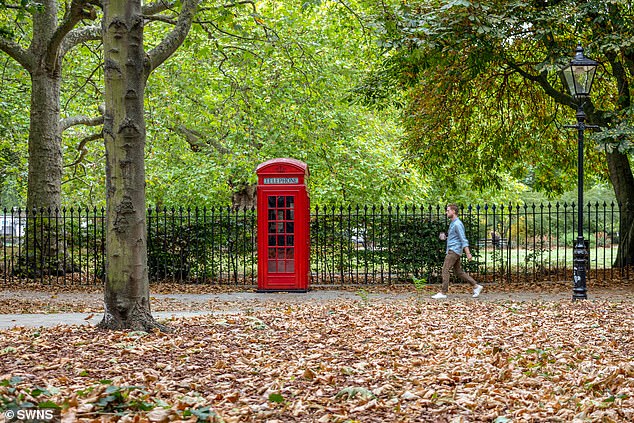 The researchers looked at UK cities Belfast, Bristol, Birmingham, London and York, and found that the drier weather was expected to have the largest impact on the latter three. Pictured: Trees shed their leaves in Brunswick Park, London in a ‘false autumn’ to survive the drought during the summer

The authors conclude that immediate action is needed to protect global urban forests and prolong the benefits these socioecological systems provide.

This includes selecting and planting more climate-resilient species as well as those that provide a large amount of cover.

Dr Esperon-Rodriguez said: ‘Trees at risk from reduced rainfall can be helped through water-sensitive urban design, which allows rainfall to soak into the ground and reach root zones, instead of going down the drain.

‘The urban heat island effect will exacerbate increased temperatures, but more tree and shrub cover in urban areas helps to reduce this effect, so leaving large trees and shrubs in place to perform these roles is really important.’ 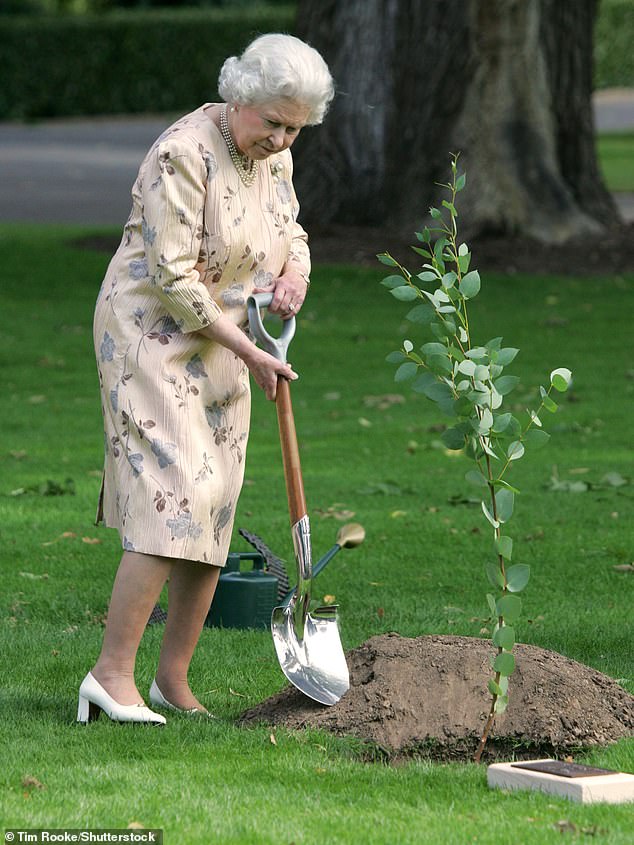 Prior to her death on September 8, Her Majesty Queen Elizabeth II regularly planted commemorative trees throughout her 70-year reign. Pictured: Queen Elizabeth planting a ‘Black Sally’ eucalyptus tree in the grounds of Government House, Canberra, Australia

The researchers looked at UK cities Belfast, Bristol, Birmingham, London and York, and found that the drier weather was expected to have the largest impact on the latter three.

Prior to her death on September 8, Her Majesty Queen Elizabeth II regularly planted commemorative trees throughout her 70-year reign.

She expressed an ambition to create a global network of trees, and told Sir David Attenborough of this desire in a 2018 nature documentary called ‘The Queen’s Green Planet’.

‘It might change the climate again,’ she quipped to the naturalist.

To mark her Platinum Jubilee in 2022, the Queen launched this unique tree planting initiative, called The Queen’s Green Canopy.

The initiative invited everyone from individuals to Scout and Girlguiding groups, villages, cities, counties, schools and corporate organisations to play their part in enhancing our environment by planting trees.

The project will ‘create a physical and lasting legacy of The Queen’s leadership of the Commonwealth’, the website says.

It has been extended to the end of March 2023 to give people the opportunity to plant trees as a memorial to The Queen.

Forests’ ability to cycle carbon will be compromised by climate change, study suggests

The ability of forests to pull carbon dioxide from the atmosphere will be compromised as the planet gets hotter due to climate change, a study has found.

Photosynthesis is the process where leaves convert sunlight and carbon dioxide into oxygen and energy in the form of sugar, which occurs best between 59°F and 86°F (15°C and 30°C).

Canopy leaves are widely accepted to be able to maintain an ideal temperature for photosynthesis, even when the air around them heats up.

However, researchers at Oregon State University have found that the leaves actually struggle to regulate their temperature when it gets too hot.

They predict that global warming could impair the leaves’ ability to stay cool and thereby carry out photosynthesis, particularly in warm climates.