While plastic surgery was once seen as a last resort for people unhappy with their appearance, more than 28,000 procedures now take place in the UK every year.

In the series, participants have their naked bodies scanned using virtual reality technology, to create avatars with their desired body augmentations, which they can view from every angle.

A panel of 50 strangers then provides feedback on the changes to help the participants decide whether to go for the surgery.

Viewers of the TV programme have raised concerns that Send Nudes plays off participants’ insecurities and encourages cosmetic surgery, with one calling it a ‘horrifying concept.’

MailOnline spoke to Francis Mathew, a Senior Production Manager at Crackit Productions, the production company behind the programme, to find out about the technology – and why he believes the show does not encourage cosmetic surgery. 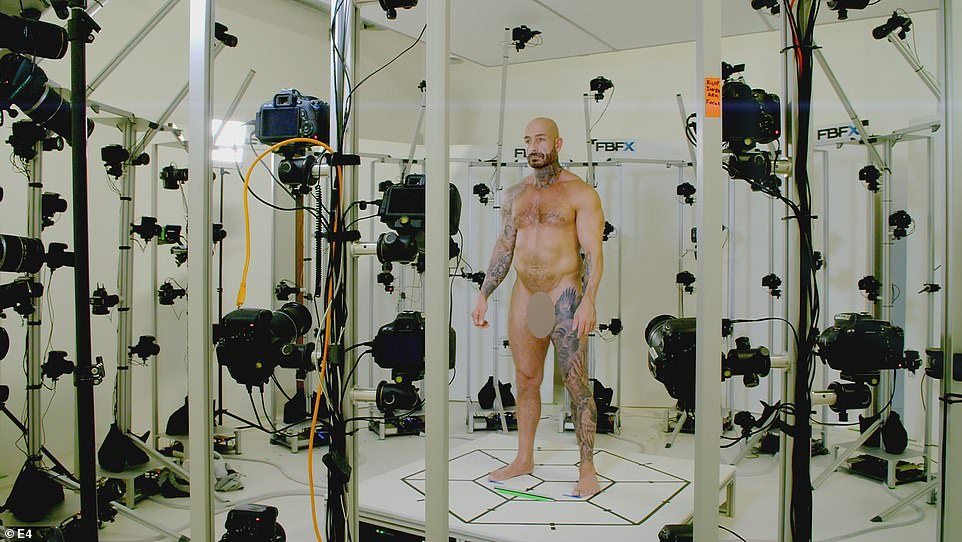 In the series, participants have their naked bodies scanned using virtual reality technology, to create avatars with their desired body augmentations, which they can view from every angle

How does the show work?

The programme is hosted by Vogue Williams, who first speaks to the participants about their body concerns and the surgery they’re considering.

For example, in the pilot episode, a participant called Steven discusses whether or not to opt for surgery to lengthen his penis, while a woman called Steph considers breast-reduction surgery.

Speaking to MailOnline, Mr Mathew explained: ‘The first stage was to scan all 20 of the show’s contributors, completely naked at the FBFX studio.’

‘These were then passed to Fluid to add detail and make the various surgical options presented to the contributor,’ Mr Mathew said.

Once the bodies were ready, they had motion capture applied to give them movement and make them more realistic.

‘The CGI hair is made by sculpting hundreds of guide hairs, each meticulously brushed, coiffed and teased into position, which in turn define the overall hairstyle,’ Mr Mathews added.

‘Materials are then assigned and fine-tuned, describing precisely how light interacts with the melanin (and hair dye!) in the hair, to colour individual hair strands.

Participants are able to view their avatars from every angle, to see what they’d look like with their desired surgery.

While you might think that viewing your naked body from every angle would be overwhelming, Mr Mathew said that the reaction has been ‘fantastic’.

‘The reaction from the participants who met their own avatars was fantastic as they were genuinely blown away by them and how realistic they were,’ he explained.

One thing that did surprise many of the participants was the scarring included on their augmented avatars. 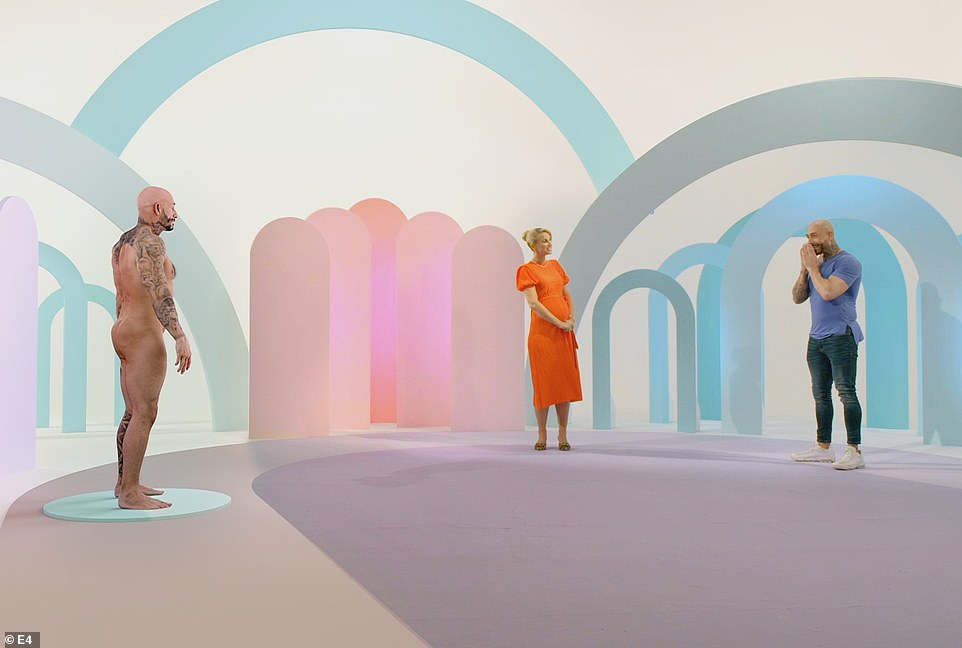 The programme is hosted by Vogue Williams, who first speaks to the participants about their body concerns and the surgery they’re considering

Most popular cosmetic surgeries in 2021

‘Many were much more taken aback by the scars than they expected to be, as all the avatars featured the type and level of scarring they would see around a year after surgery,’ Mr Mathew explained.

Once the participants have viewed their avatars, the scans are shown to a panel of 50 strangers, who ‘add their honest feedback into the mix’.

Finally, the participants decide whether or not to go for the cosmetic surgery in the real world.

According to Mr Mathew, around 50 per cent of the show’s participants decided to go for surgery based on the panel’s reaction.

Cosmetic surgeons have previously raised concerns about the link between reality TV and surgery.

In 2019, Rajit Grover, President of the British Association of Aesthetic Plastic Surgeons, said: ‘The popularity of TV shows such as Love Island has driven the desire for a toned torso, as did the fashion for women’s athleisure clothing.

‘The danger of cosmetic surgery becoming too closely linked to reality TV or celebrity endorsement is that it can make surgery seem like a commodity, which should never be the case.

‘An operation is not something that can simply be returned to the shop if you have second thoughts.’

Several viewers have also raised concerns about show’s concept, with some claiming that it is playing on people’s insecurities and glorifying cosmetic surgery.

Taking to Twitter, one user wrote: ‘Honestly #sendnudesbodysos is such a horrifying concept for a show? How can we ruin peoples mental health even more? I know let’s take things people are really insecure about and let random strangers comment on it.’ 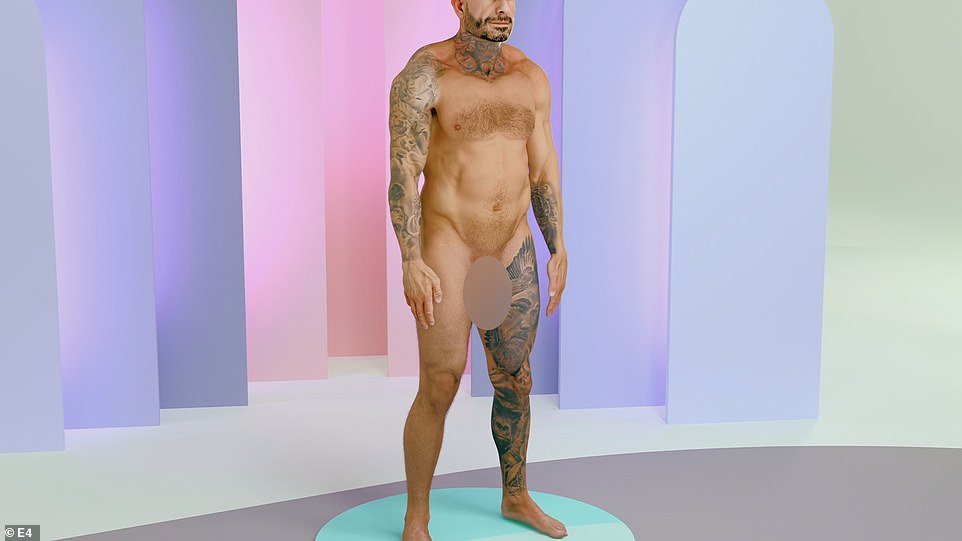 In the pilot episode, a participant called Steven discussed whether or not to opt for surgery to lengthen his penis (pictured), while another woman called Steph was thinking about breast reduction surgery

Another added: ‘Hi-tech ‘try before you buy’ for cosmetic surgery. Whats the message here? Because it appears to be, from the outside, the discovery of a whole new low.’

Despite this, Mr Mathew maintains that Send Nudes is not designed to encourage surgery.

‘We did not want to make a show encouraging surgery,’ he said. ‘The intention was to harness technology to help people make a choice about whether to have surgery by seeing and hearing about the possible risks, costs and results.

‘The show helps people make an informed decision – with additional advice from medical experts who are specialists in their field and a supportive panel of 50 members of the public.

‘Ultimately what they decide to do afterwards is entirely up to them, so it doesn’t in any way encourage or judge it.’

Clemency Green, Commissioning Editor at Channel 4, added: ‘With so many prejudices and preconceptions about plastic surgery, it can be hard for people to talk openly about the prospect of surgery.

‘Send Nudes is different, we want to challenge these stereotypes and destigmatise these discussions, providing contributors with a safe space to reveal the emotional, often jaw dropping and very personal reasons for wanting surgery and giving them the opportunity to hear constructive, supportive and surprising feedback.’

The next episode of Send Nudes Body SOS will air on E4 on Wednesday 21 September at 22:25 BST.

How the Brazilian bum lift replaced the tummy tuck 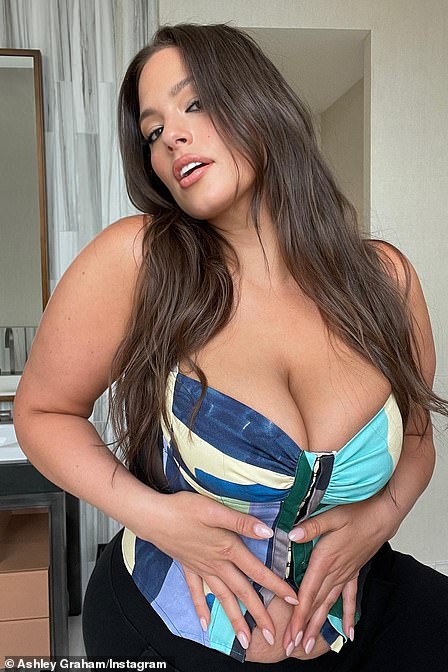 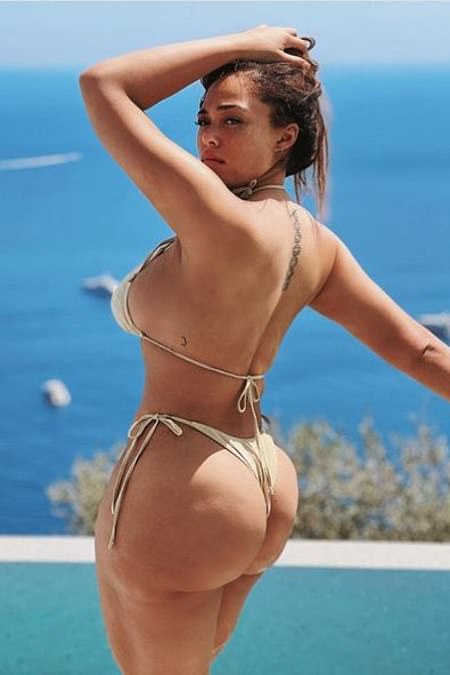 The increasing popularity of plus-sized models may be driving a surge in bum lifts and breast implants in the West, a study suggests.

Researchers said the rise of curvy celebrities like Ashley Graham could be behind growing demand for the sometimes dangerous procedures.

A study compared the social media presence and body measurements of more than 100 models.

It found no significant difference in the share of likes, comments and posts among plus-sized or traditionally thin models.

This, the researchers claim, indicates that voluptuous women are becoming increasingly popular.

The modelling industry was previously accused of promoting unhealthily slim body-types, which was linked to eating disorders like anorexia in young girls.

But there has been a rise in the number of British women going abroad to get procedures that accentuate women’s curves over the last decade.

He added: ‘Plastic surgeons may see an increased interest in procedures, including breast and buttock augmentation, that embrace a curvaceous plus size body type.’